The History of the "Second" Mona Lisa

The Mona Lisa is a work of art in its own right — one reason being Da Vinci's use of sfumato, a technique of blending light and shade.

But we find the portrait fascinating for the history and controversy that surrounds it.

Take the mystery of the second Mona Lisa, known as the Isleworth Mona Lisa.

In 1913, a painting rumored to be an earlier Mona Lisa was acquired by an art collector, Hugh Blaker. After restoration by Blaker in his Isleworth, London studio, the portrait, now dubbed the Isleworth Mona Lisa, was sent to Boston Museum of Fine Arts for safekeeping during World War I.

Thought to depict a decade younger Lisa Gherardini, one theory is that the Isleworth was painted for Gherardini's husband and the Louvre for Da Vinci's patron, Giuliano de Medici.

It is worth noting that the foundation was established by the painting's current owner, before a worldwide tour of the Isleworth in 2013. Their findings were subsequently published in the 2013 book, Mona Lisa: Leonardo's Earlier Version.

Visitors to the Louvre spend an average of 15 seconds 1 at the Mona Lisa. After jostling for a view on your visit to the Louvre, consider the equally enigmatic smile of a potentially younger Lisa:

The Louvre Mona Lisa
1 http://www.huffingtonpost.com/james-elkins/how-long-does-it-take-to-_b_779946.html
Learn more about the Mona Lisa on our Louvre Tour
Back to the blog 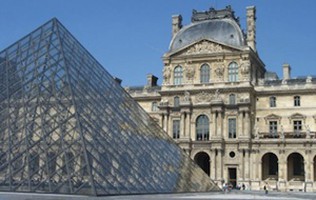 Explore the famous works at the Louvre, including Leonardo da Vinci's Mona Lisa, Venus de Milo, and the Victory of Samothrace.